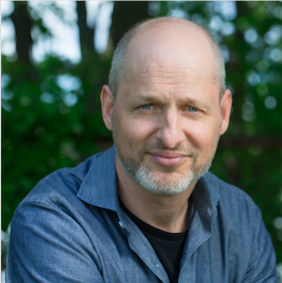 Daniel Johnson–a poet, educator, and veteran nonprofit leader–most recently served as the founding executive director of 826 Boston’s youth writing center in Roxbury for nearly a decade. At 826 Boston, Daniel helped deliver writing programming to more than 20,000 under-served Boston Public School students, published a number of award-winning collections of student writing, and helped grow 826 Boston into the city’s premier youth writing center. A Teach for America alumnus, he is a tireless proponent of delivering arts programming where it’s needed most and has taught in a variety of settings from urban schools to prisons, and county hospitals to residential programs.

Daniel is the author of How to Catch a Falling Knife, a book of poems published by Alice James Books. In conjunction with the book’s release, he performed an illuminated text involving poetry, music, and the found home movies of a World War II-era Fuller Brush salesman. Shadow Act: Elegy for American Journalist James Foley, Daniel’s second collection of poems, is forthcoming from McSweeney’s in Spring 2023. Daniel’s writing has been featured in outlets such as NPR, PBS News Hour, Best American Poetry, Boston Review, and elsewhere. In 2016, Daniel was named a finalist for the Poet Laureate of Boston and has received numerous honors for his writing including awards from the Massachusetts Cultural Council and the Chicago Poetry Center. In 2018, Daniel is serving as an Artist-in-Residence with the City of Boston. He is also a member of the Writers’ Room of Boston. When not reading or writing poetry, Daniel enjoys setting off on adventures with his wife and kids in New England and beyond.